The Summer Of Love Festival 07 – Friday

Yesterday was the first day of The Summer Of Love Festival which took place in SecondLife. As it is now Saturday morning and I’ve had 4 hours sleep I wanted to get my first thoughts down to share with you, just because so many amazing things took place that must be documented. There were highs and lows I might add, which of course is typically how a festival works in RL.

I don’t really want to get into the dynamics of SL culture here, nor really start mapping out how it all differs, and why, from RL, so I guess I’m saying if you are not a SL user you’d best skip this post as you might not “get it”.

The Festival was only conceived a short time ago, I think about a month, it was conceived based on the fact we are 40 years on from the original Summer of Love, and to date I hadn’t heard of any celebrations taking place to honour that birthday, what is a 40 year birthday anyway, is it Ruby? I think so, which is red or pink, and also a celebration of the month of July, which we almost made. August is green so we got those colour schemes about right?

The whole idea of course was to celebrate YOU the people, and YOUR ideas for change and your sense of love, celebration and consideration of all things giving. 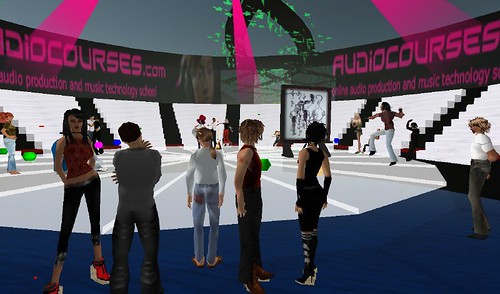 If the schedule or event in any way made you stop and think about giving and sharing then the festival got to you, job done.

It’s all so easy to wrapped up in work and build “loaded” relationships, often very selfishly, so this is one chance to forget all that crap, and open yourself.

The day started mid afternoon for me being on GMT, and early morning for SL time with a cracking first set by Rich Palmer, who really set a great vibe so early in the day, nice one Rich!

As if I wasn’t busy enough with a flood of constant IMs (instant messages) in-world I got the idea I wanted to capture some of the stream live as it was happening while I recorded the next episode of AC Radio, crazy perhaps but my most memorable and inspiring moments concerning audio and music have always been live in some way, the added pressure, the buzz, whatever something about it really floats my boat, which I just do not get from non-live working.

I captured Rich on episode 93 by feeding my SL Shoutcast stream into my audio hardware at ACHQ, and I have to say loved every moment of it of the live capture. 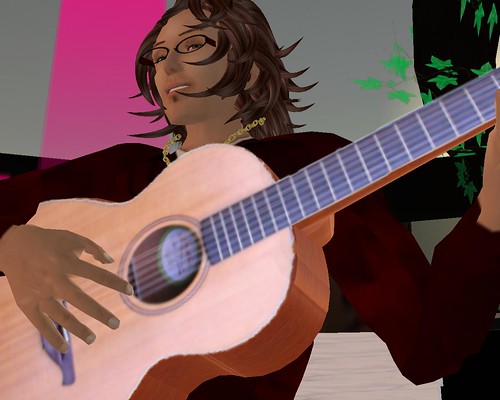 I will also try to do the same today (Saturday) if at all possible time permitting.

Mostly the performances were smooth and the transitions between performers were slick, most likely as the musicians were fairly well skilled at this having done it many times before. I got the impression people were using a variety of equipment and software, some of it sounded great and some of it sounded average, but that was not the point really, the point was to get it out there.

I felt very sorry for Jimmy Golding who Jason Jarrett was helping, turned out the studio engineer had some technical issues which prevented them from streaming the recording studio feed, which was a BIG shame, as having a full band studio stream would have been utterly orgasmic for all of us, Jason worked hard too, to make it happen in the lead up. We did however decide Audana (one of the co-sponsors) would do a “proper job” in the future for a SL promotional event for them instead, so not all is lost, and in fact might be more beneficial for them.

I was blown away with all the people coming and going and all the sharing of link love on Twitter and various other places, in fact Maxie even streamed some of the Foxy set on Ustream which was amazing.

I saw people at the set that I’ve only ever had email exchange with previously or voice chat, seeing an avatar and dancing with them was delightful. The highlight may have been sharing a three-way pose ball with Chel, Juel and Foxy!

That’s all my thoughts for now, I have millions more which I hope I find the energy to blog later or in the week.