The RIAA are Pissing Into The Wind

This passed week has been an absolute milestone for the music business in a bad way, well actually it’s a milestone for music and musicians in a positive way, once fully embraced. I would also argue that progressive record companies, with appropriate visionaries at the top could do very well also.

A report written by Michael Arrington published on TechCrunch called The Inevitable March of Recorded Music Towards Free basically paints a very gloomy picture for the Record Industry Association of America (RIAA) and indeed many music Industry bodies.

In the article, using the laws of economics, the discussion is how the value of music (in the sense of a physical entity) will drop to a value of zero.

That is music will cost you nothing…in the sense of getting a version of it.

In the same week we saw RadioHead offering their newly created album for free, well actually that’s not technically correct, they have offered the album to be purchased on YOUR grounds, YOU are able to decide what you wish to donate/pay for an mp3 copy of the album. Incidentally I grabbed a copy myself and paid 5 quid.

Probably the first time in a long time I have personally bought a digital clone of music, and aside from buying it to make a point, it is actually a cracking album, which I’m listening to as I write this.

Yes digital clone is exactly what you are buying, possibly stealing, obtaining from a peer to peer (p2p) network, sent from friends, gleaned at a LAN party. However, you are not technically stealing anything nor copying, you are actually cloning information, which is the point in this argument, the clone reproduction costs nothing, hence the drop in the value of music distribution.

The other thing to mention here, and something which some people miss, is that they are giving away the mp3 version of the album. Now I don’t know about you, but I think mp3 sound sucks major ass. Ok so I have audio engineer ears and I work with mp3s every day and continually publish mp3s, but let’s remember the full story here.

The average mp3 has a significant reduction in quality when you compare that to what comes out of the recording studio and onto a 16bit CD. And beyond comparison when discussing DVD audio and other higher sampling and bit rate formats. Yes, mp3 are handy for distributing around the net, and putting on your izunepodriver but they ain’t the “Full Monty”.

Why am I mentioning this?

Well of course Tom York of RadioHead knows full well that he can release his limited edition box-set in a month or two just before xmas, which will contain the “Full Monty”, along with tidy artwork and other bits and piece of merchandise at a whopping 20 quid! – very nice work if you can get it.

Many people still hold dearly the notion of owning something tangible, and of high quality, and people will continue to pay for that. Some people love the tangibility of a signed CD, a limited t-shirt. I have no doubts RadioHead will shift buckets loads of the special box-set, especially during the xmas lead-in, smart marketing indeed.

Of course the other thing that nobody is mentioning is that RadioHead gain LOTS of money for their mp3s which to be honest anyone will be able to get within hours on a p2p network anyway!

Now in the same week, I have been really upset and shocked at the paranoid behaviour of the RIAA who have come down incredibly hard on the single mother caught file-sharing with her mates. Now I know full well that YOU (if I consider a cross section of my readers here and do a rough hands-in-the-air count for an average) have done the same. In fact in this very week I carried out three separate polls each with about 30 students in a room, and guess what? .. around 98% have downloaded music in what possibly could be construed as illegally.

It’s not surprising then that certain formats of music distribution are destined to become free. And it is with this knowledge that the RIAA are fully aware of and carried out a shocking public shaming campaign on one poor woman.

Truth is, the “war is over” as Todd Wachtel mentions. There is no battle anymore, the industry so called “experts” are frankly “pissing into the wind” and getting seriously wet, and the longer they fight against the tide the more mistrust they invoke in us mere mortals, they are not building bridges here in order to embrace the new mechanisms and emerging model.

Days after the RadioHead news Oasis and Nine Inch Nails have also stated their intention to give away their newest work thus fueling the fire to the inevitable. Personally I can see these acts doing well out of enticing more listeners to buy tickets to large concerts, thus in essence not loosing money but gaining a wider audience.

The music as an mp3 is the new banner ad, the new vehicle for viral marketing…..

I’ve heard many voices with tones of fear, mainly from musicians about lost revenue, mostly from so called “struggling” artists, but, really? I mean really?

As an artist surely the point is about getting as many people as possible to listen to your music, surely that is exactly what it is about isn’t it? It is about building a fan base and buzz, so isn’t giving your music away for free and encouraging copying/cloning and distribution, actually a good thing?

What are you concerned with then, making money?

As an artist there are countless way to re-coup money, so many I’ll save them for a future blog post, but all that is required is a slightly different mind-set on how you build your audience and what you offer in terms of merchandise.

As my friend Rich Palmer says “Why chain yourself to the old model when there are successful new systems coming into place?”.

Nobody is actually saying they do not value music, they do, I do, I’m a musician! But the voices are saying, share it with us and we’ll tell all our friends and probably come and see you live and probably buy a t-shirt maybe even a box-set with some shwag in to hang on the wall..

And of course I’ve not even mentioned mainstream play-out and royalties, which do not seem to be going away, I can’t see that happening in the short term either. Of course this is exactly why the PRS want a piece of the pie regarding netcasts and internet radio, they see it coming.

Are you pissing into the wind, what do you feel about all this?

A big thanks to the Music Technology Facebook soliders who inspired some of my words here, thanks. 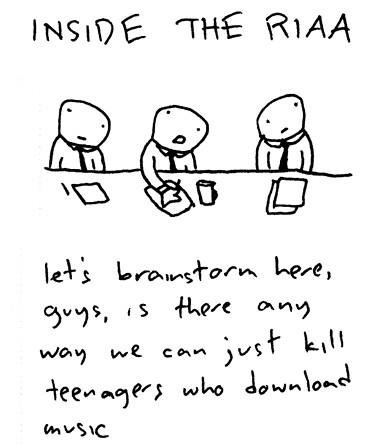 UPDATE: Month Old, thanks to Ben for sending: What’s the future of the music industry