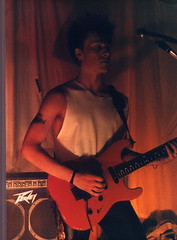 That’s a picture of me taken many years ago, I think around (bear in mind it’s hazy) from 89ish. And if you were able to see my feet you’d be able to see me sporting a right royal pair of Kickers

You see for me, when growing up, Kickers were the tough old rugged footwear that people on the fringes wore, not the every day good boys so to speak, it was the slightly naughty creative crowd, the types of people that I used to hang with man … (umm I still do I suppose but we grew up a bit).

The reason I mention these odd ball boots here is that I was invited to a pre-festive Kickers PR do but a stone’s throw from Liverpool street, London, where I got to learn about the history of the mighty boot. Indeed it is a fascinating history and whilst invented during/after(?) the French revolutions of the 60s, the Kicker still seems to not have been able to have kicked its slightly “out there” personality, it is slightly rebellious you see.

I see that as good thing, you know that when musical icons such as Jarvis Cocker and Shaun Ryder sport the shoe it is not in the “mainstream” (gee I hate that term).

Perhaps Kickers would like more mainstream adoption mind you. In fact I am sure they do but to be frank it has been completely off my radar, and I wonder why? Fact is there is a complete range of really cool looking shoes and boots, just pop along and have a look at the cool shoes.

As I have two daughters I’m particularly interested in the cute little pink ones.

I mean they are seriously cute right? I know I’m going to go get some, and having now had conversations (post PR event) it seems all the new mummies know about the Kids Kickers … crap, they always seem ahead of the game.

Anyway, the point is that the PR event worked, both Gary Bradshaw the dude behind Splendid and Ian Blackman “The Boss” of Kickers UK, did a neat job in brining together a bunch of noisy media peeps in the hope that we would spout off on our sites.

The event focussed on some “user generated” music vid/animation type thing, which whilst was “OK”, it didn’t do so much for me to be frank, but boring, I could think of 10 things far better to bring a community out to tell their stories..

However, what I did find really interesting is that Kickers are launching a new range of Boot to celebrate being in the shoe game for 40 years, and the boot itself will have the story of the company drawn all over it… hehe yes pretty quirky! 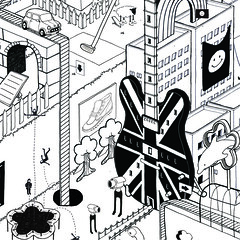 The picture here on the left shows part of the story of Kickers and that will be wrapped around a white boot and launched in August 09 I believe.

The thing is about that is if you were buying the boot you’d so need to know about the story first otherwise you may be mistaken for thinking the boot just has random drawings all over it.

I was asked if I would wear a pair and I guess I would, which is good for Kickers because they are sending me a pair in a month or so.

Good company, good people, they hooked me in again.

But do you know what I am talking about, do you wear them, or have you worn them? Got a story about them too?