How To Rank on Front Page of Google


OK so in the past it was hard (cough) to rank on the front page of Google if you were new to the business, in any sector. Lots of things were (actually still are for non real-time) taken into account in order for your site to rank well for a given term. Lots of weight is given to credibility, i.e. other sites (humans) thinking your site IS credible, by the way of incoming links. If we all link to a site it must be good content right? This model has been Google’s backbone product for years, forever actually.


This experiment has been conducted numerous times in other places, and you may have come across it already, but because I think Google is shooting itself in the foot it warrants a mention.


So Google has started including “real-time” results in its index, in particular from Twitter, the micro-blogging service. This basically means it is open season for you and me to actively use this service as a tactic to appear on the front page of Google for any given search phrase.


So considering Tiger Woods is hot news at the moment I figured this would be a good test target for ranking. Before the inclusion of real-time the chances of appearing on the front page of Google for “Tiger Woods” were slim pickings for mere mortals. Typically, of course, it would usually have only been credible news sources, or perhaps other content that was mass approved through incoming links (us all linking to it). That is still the model Google has in place with the exception of a little iframe half way down the page, the real-time zone. 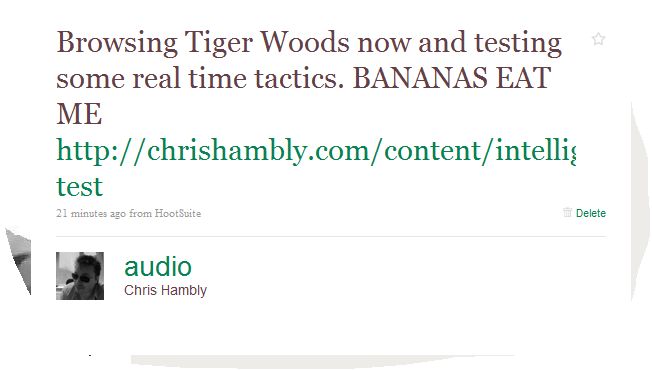 OK, so a tweet that clearly contains Tiger Woods and some other attention grabbing nonsense and an all important link that someone may click on (in this case an intelligence test, just for the irony of it).


So a few moments later, literally within a minute or so I searched Google for “Tiger Woods” and sure enough found my tweet. 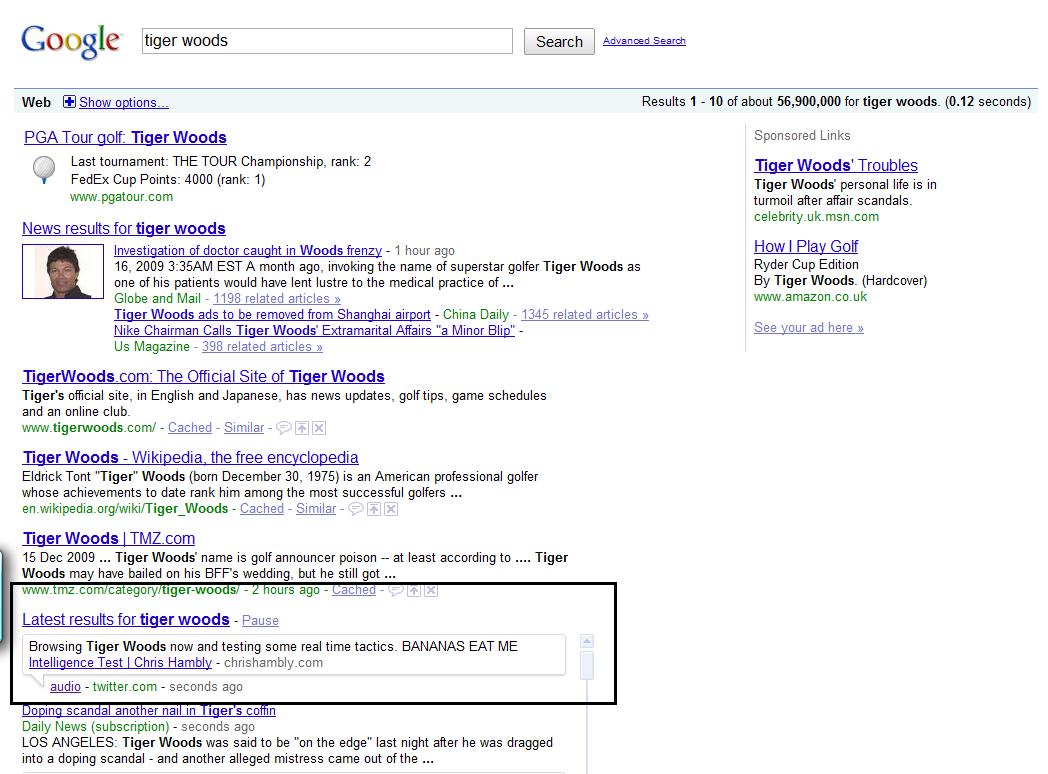 You can clearly see my ridiculous tweet, and my url.


Why is this bad?


Well think about it for a moment, this is now open season for real-time spam… hell I might even employ someone in a developing country, pay them peanuts, to sit down and tweet nonsense all day, with affiliate links included in the tweets, and target very competitive key phrases. < oh that happens already?

What do you say? – you could say hey Chris this is fabulous, people are all wonderful people and good through to their core, and we’d never ever game the system, our tweets are credible and we only speak the truth. Well folks, I have news for you, that is not the case with the masses, and once the search dudes and dudettes catch on to this (done), you can be sure to see utter nonsense in that real-time zone.


Google, you have gone nuts.