An interesting one this, as I read the latest report concerning social networking sites and a loss in productivity, from Peninsula, a UK employment law firm.

The report mentions that “233 million hours are lost every month as a result of employees “wasting time” on social networking.”.

I’ve not read the full report but apparently 3500 or so companies were included in a survey, which is a fairly sufficient number to extract some meaningful evidence.

I’m presuming that the national average hourly employee rate has been used as a method of arriving at a final figure of £130m (about $260M USD) lost per day, in terms of productivity (not those companies in the survey, that’s the national figure).

Sound like a lot to you? Hmmm, well before we all get scared and start running to the IT department to switch off Facebook access, let’s give this some perspective.

Facebook and various other social media networks are by far “small-fry” when it comes to a loss in productivity, of which in many cases has been in existence since time began. Some of the areas where losses take place might surprise you but include the following list I have cobbled together: 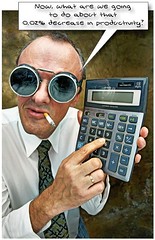 You can find out for yourself very easily by doing a google search on something like “productivity loss uk” and find hundreds of examples which are far higher up the leader board than the cheeky ole Facebook example, which include sick days, lateness and various other human conditions.

Companies should question their own structural losses far sooner than jumping on the band wagon of social media bashing, and blaming their employees.

In addition, companies might also consider investing in some quality research to assess the extent at which social networking actually makes for a happier working environment, with satisfied employees, the argument of course is can more work per hour be achieved?

Are you in a position where social networks are frowned upon in your environment, does your very inefficient manager (costing the company thousands per year) question your usage?
Have you embraced social media as a manager, why, or why not?