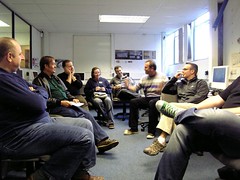 Well it has been well over a week and I’ve decided that now some time has passed I’d unload some of my thoughts into my blog, after all remember my blog is the same as you’d get from me in the pub, so join me in a drink while I mention my personal highlights.

The ACHUB MediaCampBucks07 was the first if its kind for Bucks, in fact the first of its kind for many areas in UK, the slant of this event was enabling an interface of sorts between people working in the commercial sector and academia, and you know what, we all certainly achieved that.

On the day we had three broad themes running:

Therefore three sessions were running simultaneously in order that a variety of choice was constantly present for all the participants, it was a cracking atmosphere with everyone checking out the schedules posted-up on the session room doors, and deciding if the current topic was for them, or not.

The event started for me on Friday morning by collecting Kris Eliasson from Heathrow who was representing Sony Ericsson. This guy is an ex-student of mine who studied with Audiocourses.com the distance learning school I am CEO of. Kris started as a student and then became a Production Advisor for the school and then since those days we have become good friends, and this was the first time I got to shake his hand in real-life and move onto serious discussion about the future of mobile content distribution, was awesome.

The event also saw another ex-student of Audiocourses.com in Mike O’Hara who has gone on to make audio his main income stream having set up a thriving business around podcasting, again what a buzz to see these connections firing. 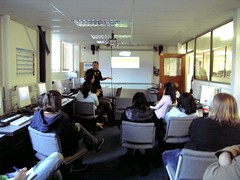 On the Friday evening many of us met up in a local venue for a couple of drinks and a chat, this was the first time most of us had met and it was a real buzz seeing the next character walk in and introduce themselves, finally putting a real face to names was amazing. Observing different groups of people with wide ranging backgrounds and jobs getting social together was a thrill.

I met some amazing people on the day too numerous to mention, you know who you are and how we interacted, and let me just say thanks so much for giving and sharing, YOU made the day a success, and I’m excited to see you again soon.

I want to personally thank a few people for making the day happen, firstly Asha Treacy for driving me to the venue first thing Saturday morning, (I had abandoned my car the evening before following 4 pints of beer). CJ for being very organised and “calling time” with 10 mins to go in the sessions, this was awesome and not planned, she just took control of that and I need to thank her for it, we needed that structure. Eaon Pritchard the talented Scott who put together the logo for MediaCampBucks07 and also came up trumps with some direction boards and banners (sponsored by Weapon7) which we placed around the campus, smart man is Eaon, though he did have me worried as he had been out on the pop the night before and was missing in action for a while. Mike for getting a serious Jam scene going on in the Glasshouse on Saturday evening, sadly I missed most of it but checked out the repeat on Ustream.tv.

ACHUB MediaCampBucks07 was a success without a doubt, we had about 60 participants throughout the day all told. I’m humbled by all of this and I feel a sense of something great, we have created a brand which has a sense of expectation attached to it, all the participants now know what to expect from an ACHUB event. 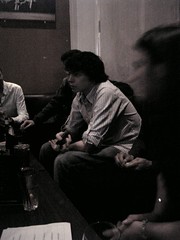 Looking to the future of the ACHUB we plan to have a virtual event take place in SecondLife before xmas, probably music heavy, and also plan to host another real-life event for some time in the new year which may be similar to MediaCamp, or may be something different completely, in fact if YOU have some ideas about that I want to hear from you, I’m keen on using the momentum we have with ACHUB to continue hosting has we have done since 06.

Recently we have secured the domain ACHUB.ORG which will likely become the main portal before too long, and yes, with user accounts so you can participate with the content, after all it is YOURS, this is YOUR group, your brand, your dynamic to embrace and share.

As a closing statement I’d like you to continue the growth of the group by bringing someone in, a stranger someone “outside” of this web2.0, someone who needs it most.

I’m keeping this short but let me know your highlight of the weekend with a cheeky comment.